He’s in the motorcycling hall of fame, he raced at the Indy 500, and he’s the guy in the iconic photo, laying flat in his undies twice on a screaming Vincent Black Shadow at Bonneville while setting the motorcycle land speed record in 1948.

Rollie Free was born in 1900. By the ’20s he had become enraptured with motorcycles, working as a salesman at a Kansas City Ace dealership. He quickly got a reputation as a brave rider as he began his speed record attempts on four-cylinder Ace touring bikes. An opportunity at another KC dealership, this one selling Indian motorcycles, drew in Free and he quickly became known as the fastest street racer in the area. He took special joy in beating up on the Harleys, mortal enemies of the Indian brand.

Moving on to more organized activities, Free tried his hand at organized and sanctioned racing as a factory backed Indian rider. The first race he entered, a 100-mile affair on the board track in Kansas City, resulted in a strong qualifying effort, but a disappointing finish, finding Free somewhere mid pack.

Not much is known about the number of races Free entered, finished, or won during the barnstorming days of the ’20s and early ’30s but suffice it to say that he was nationally known in an era that produced few such people. These were the days before most of the roads in the country were paved, it took weeks to get from coast to coast, and mass communication like the internet was seen as something aliens would bring to the planet.

What we do know is that Free liked long-distance races, grueling several-hundred-mile contests that were the ultimate test of man and motorcycle during this time period. He ran 200-mile races in Georgia, Florida, and as a special footnote, he raced in the first Daytona 200 on the beach course back in 1937.

Jumping back a bit, he used his business sense and growing fame to strike out with his own Indian dealership in 1927 in Indianapolis. Like seemingly every other “fast” guy of the era, Free was given a ride at the Indy 500 in 1930, but his race was ended before even making it half way due to mechanical problems. He would race in the 500 again, this time in 1947, but while running 6th, he cooked a motor and ended his second bid early once again.

Back to the bikes, Free had become adept at making high-speed runs in the late ’30s, holding several AMA speed records on Indians that were run at Daytona Beach. Again, Free reveled in beating the Harleys, who by this time were starting to establish not technological superiority, but sales and market share superiority.

Another rather dubious gap in Free’s history occurs from the late 1930s up to the start of WWII. Free joined the Air Force and was an officer in the aircraft maintenance discipline. He being stationed in Utah was the first piece in a puzzle that would result in an iconic photo and a triumphant land speed record.

During his stint in Utah, Free went to and by all accounts became fascinated with the Bonneville Salt Flats and their speed trials. Although for obvious reasons he never participated in them while still in the military, a seed was planted in his consciousness and he knew that he’d be back.

Leaving the service in 1945 at the close of the war, Free headed back to Indy and continued to race Indians, although by this time the company was faltering badly. He ran long-distance races, participated in short 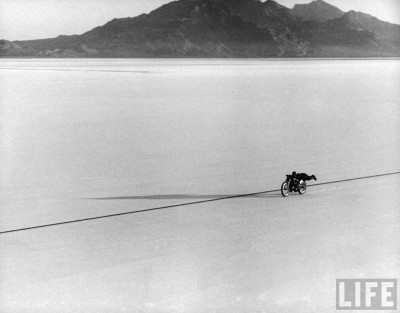 sprint races, and even (we’re sure reluctantly) dirt-tracked Triumphs for a time.

We’re not sure of how the connection was made, but in 1948 John Edgar, a wealthy west coast playboy and sportsman contacted Free and asked if he would be interested in riding a motorcycle, owned by Edgar and sponsored by Mobil Oil, at Bonneville . The bike, which was the very first Vincent Black Lightning had all the trimmings to beat the snot out of the existing record.

At Bonneville, it became abundantly clear that this bike would do everything that Free wanted it to do and even more. On his first run he was already well ahead of the 11-year-old record set by Joe Petrali on a Harley-Davidson. After several attempts, Free was in the books with a two-way average of 148.13 mph, burying his mechanical nemesis, but Free wanted more. His motivation has never been fully flushed out, but we’re thinking that setting the mark at over 150 is a bit psychological warfare on his part.

There was a bit of a catch though. Free’s leathers had torn during his earlier 148-mph blasts. Rollie had adopted the riding style (for high-speed runs) of removing the seat and laying on the rear fender, straight out like superman to be more aerodynamic on the bike. Normally he did this in full gear, with a helmet, boots, and all the other riding garb of the day.

For the 150-mph run he decided to ditch it all because he thought the flapping leathers were slowing him down. For his helmet he switched to a swimming cap. For his boots, a pair of borrowed sneakers, and for his leathers he went with a Speedo bathing suit borrowed from friend Ed Kretz. Famously, Free was quoted as saying, “I stole the swimming trunks idea from Ed Kretz, who used to do the same on Southern California dry lakes. Incidentally, Ed looks much nicer in a swim suit than I do.”

Free launched off, kept his head straight down, simply staring at the black line to keep him on course and rocketed his way into motorcycling history and gearhead legend with a 150.31-mph lap.
Free came back to Bonneville in 1950 on the Vincent again, this time turning 156 mph to raise his own record. It’s easy to dismiss these numbers in today’s world of showroom stock 200-mph bikes, but back in the late ’40s and early ’50s, even race bikes were barely scratching these numbers. The Black Lightening was as close to space travel as there was in those days.

After his exploits, Free relocated to California where he operated a service station and remained involved with motorcycling as a speaker and historian until his death in 1984.
Although his time in California was quiet in relation to his days barnstorming the country in the ’20s and speeding down the salt flats in the ’40s and ’50s, he remained a success in the running of his business.

Rollie Free is a gearhead guy you should know because he’s yet another of those pioneering people who accepted no excuses in working to achieve his goals, rewrite the history books, and kick Harley-Davidson’s ass in the most public ways possible! I’m sure he would have been a ball to hang out with back then.