(Photos: DPL Digital collection) – Since last week’s look into the history of trucks from the early 20th century was such a hit, I am going to make a regular thing of it and call the series Truck-Ology. We have another great grouping of photos for you to enjoy here and these are also accompanied by captions that give you some of the history of the brands, some mechanical information, and a little more in-depth of a gearhead peek than you would otherwise get .

The history of trucks is in many ways the history of our country. These were the machines that hauled the raw materials and parts that helped buildings shoot up from the ground, that helped support war effort, and that helped our country grow. As you’ll see that growth and the travel associated with it were normally arduous and terrible but it happened and got us rolling on the road to where we are today.

Truck-ology, a look at the history of trucks in America. You’ll dig it!

Here’s a 1918 Packard dump truck hard at work somewhere in America. The coolest thing? You can barely make out what the grill says but due to my dockery I knew what it said already. “Save a freight car for Uncle Sam” is what Packard was painting one the noses of all their trucks. Why? Well WWI was on and the country was moving all kinds of raw materials and war supplies on the rails. Trucks were seen as being able to ease the burden on the railroads…and it helped them sell more trucks. 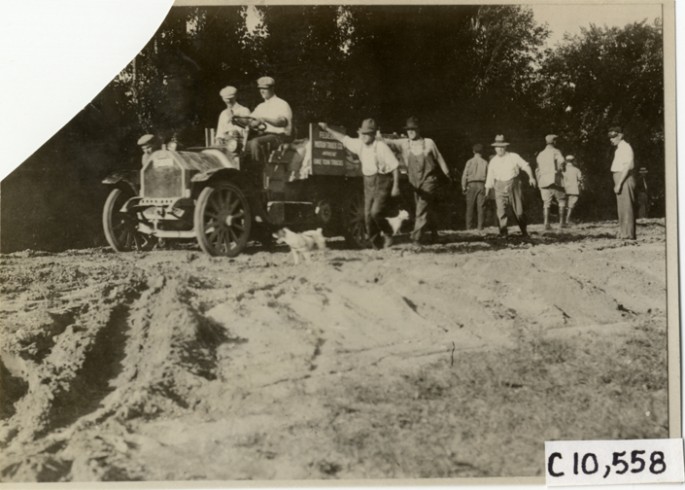 In 1912 the Chicago Evening American newspaper sponsored a truck “reliability” run and it drew most of the big manufacturers to test their stuff for free publicity and the prize. Since the roads were an abject disaster at that time in American history most of the trip looked like this. 10 guys getting a skinny tire truck un-stuck from dirt and muck. Must have been a real blast! 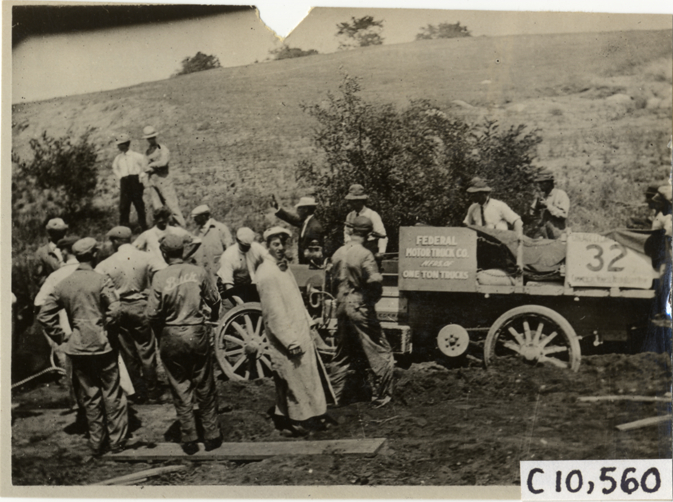 Here we are again! Same trip, same truck. This time we have a whole gaggle of people working to get this very buried rig free. Interesting points. The guy in the Buick jacket. The guy in the very long coat is likely some sort of enthusiast driver from the era, the fact that this poor truck is buried right up to the rear axle. Have fun, boys! 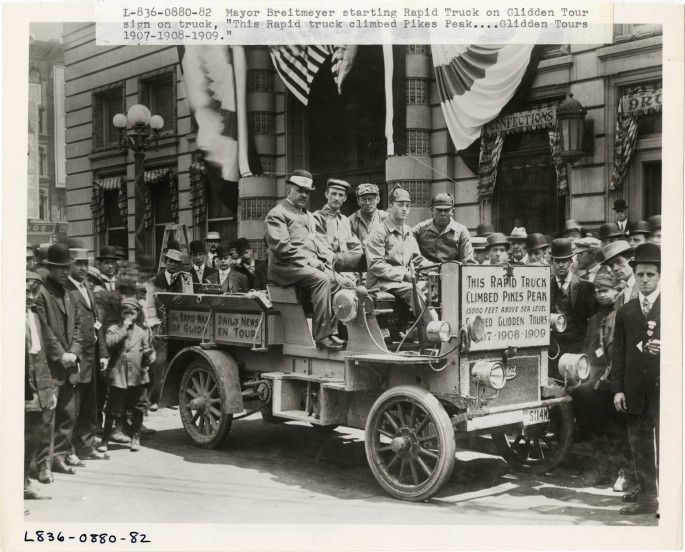 These guys were ready to begin the 1910 Glidden Tour. The Glidden Tours were held by the American Automobile Association and were designed to be “reliability” runs where participants were scored on how well their stuff ran and did. This Rapid truck had already climbed Pikes Peak and was now ready to set forth on the 2,800 mile ride that stopped in places like Dallas, Wichita, Des Moines, Memphis, and Chicago among others. Note the lack of smiles. 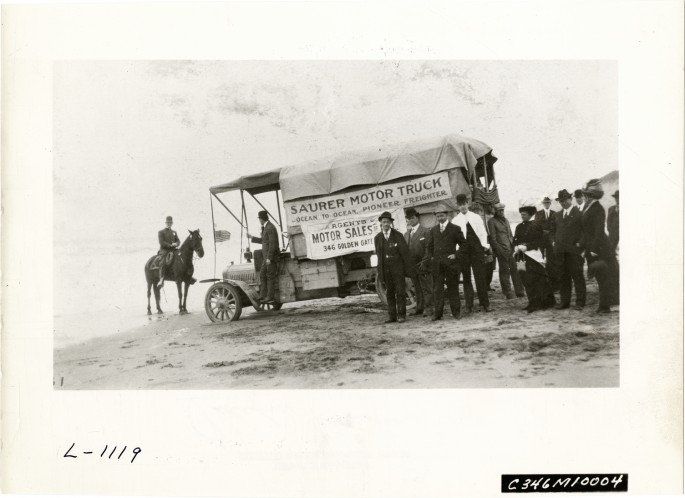 Dipping a toe into the Pacific! This Saurer truck made the transcontinental trip over 100 years ago. There is no record of how long it took. We dig the cop on his horse standing in the ocean. 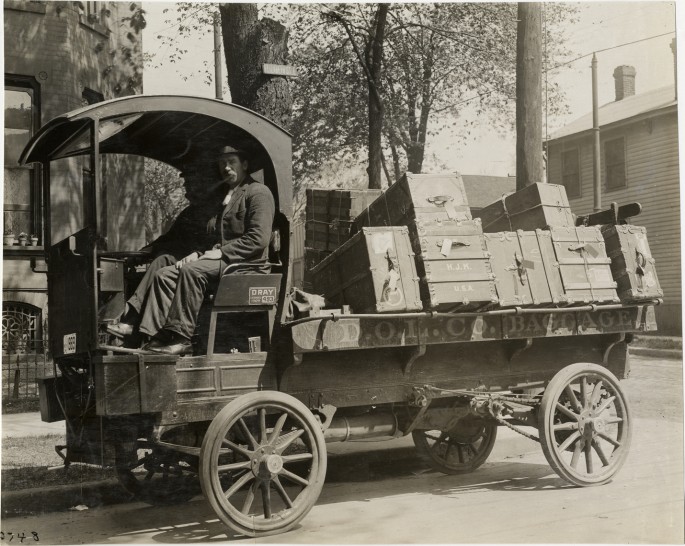 This rapid truck is loaded up with cases containing who knows what. The photo was taken in Detroit and judging by the name of the company on the side of the truck, these guys are delivering baggage from incoming passengers on trains to their final locations. Just the cases themselves look heavy as hell. 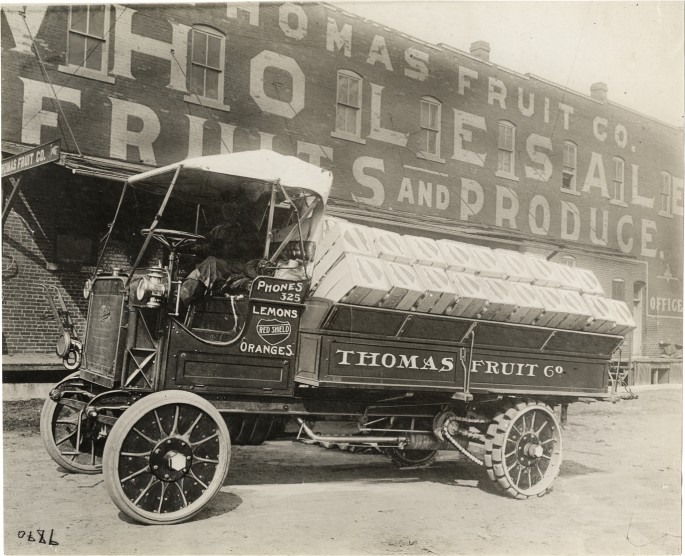 A load of crated citrus resides on the back of this truck in 1910. Note the phone number of the Thomas Fruit Company. Yes, it is 325. That’s the freaking telephone number. The blocky rear tires looks like traction masters for sure. Also note the cool looking horn on the front of the truck. 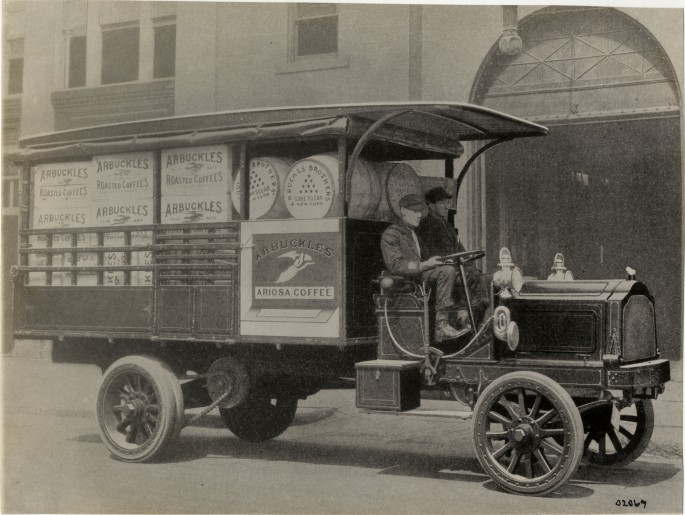 The truck is a 1910 Packard and the cargo is as precious as any city dweller can imagine. Coffee! There’s some sugar on there too but most of it is Arbuckle’s coffee. If you squint you can see some of the beautiful pin striping on this rig. Ever wonder how long this thing was in service and what the final straw was that put it out to pasture? 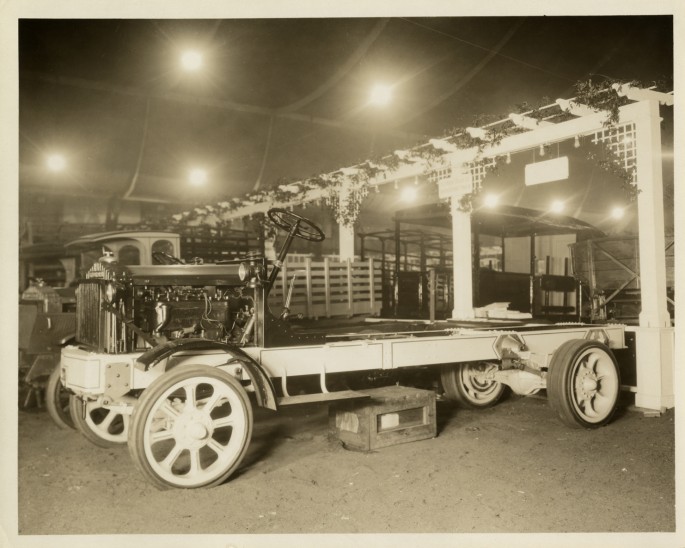 This is a 1921 Bridgeport Truck on display at a truck show in New York. Obviously they wanted to highlight the chassis construction of this one. Kind of tough to tell but it appears that this Bridgeport was a shaft drive instead of chain drive. Anyone else see sprockets? 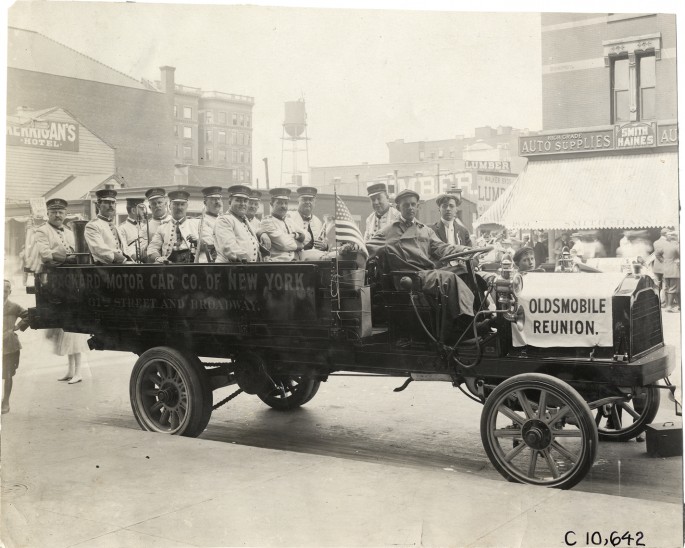 This open back 1908 Packard truck is hauling a band, which is cool. The quizzical thing we see is the “Oldsmobile reunion” banner on the nose of the truck. In fact what it was is kind of neat. This was a gathering of Oldsmobile owners and more than 200 of them showed up in 1908 to celebrate their cars and their ownership of them. After a parade the cars all ended up at some sort of a park where a baseball game was played between Oldsmobile owners and newspaper reporters. Not making this up. 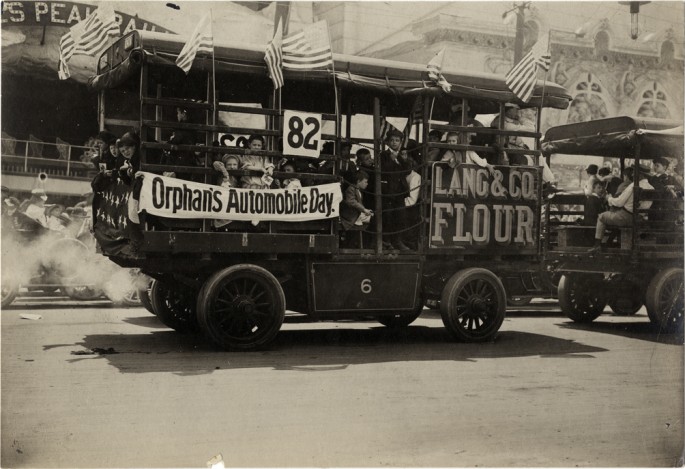 While we do not have a specific date on this photo we can tell you that “Orphans Automobile Day” was something that happened in many major cities around the country for decades. The idea was pretty simple, especially in the early days. Give these orphaned kids something to look forward to in the form of a ride and a day at the park to forget about their cares for a few hours. This truck was normally used to haul sacks of Flour but it was pressed into service to hall kids away to the park on this day. Odd to think that every child in this truck has almost certainly lived a full life and passed on by now. 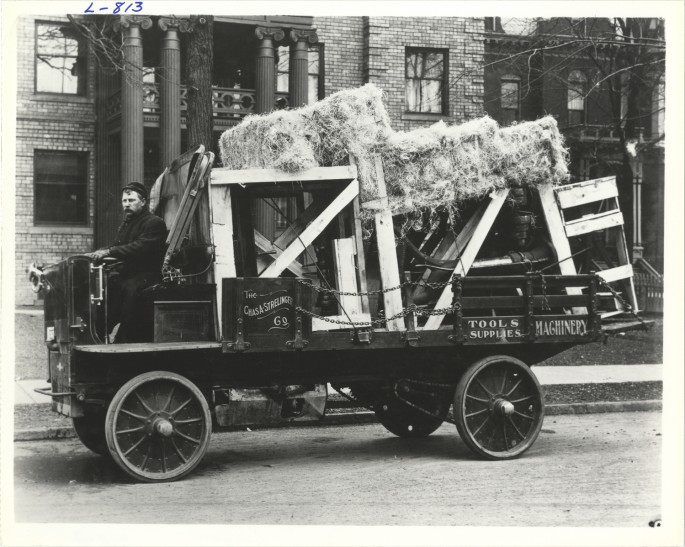 Here’s a Rapid truck that is loaded with an interesting mix of hay and machinery. We’re not sure what the hay is for but we are sure of one thing, Rapid trucks. You may have noticed a ton of Rapids being shown in these photos. There’s good reason for that as they were a popular manufacturer. In 1909 General Motors bought Rapid and the beginnings of the GMC truck division were formed. How’s that for some history! 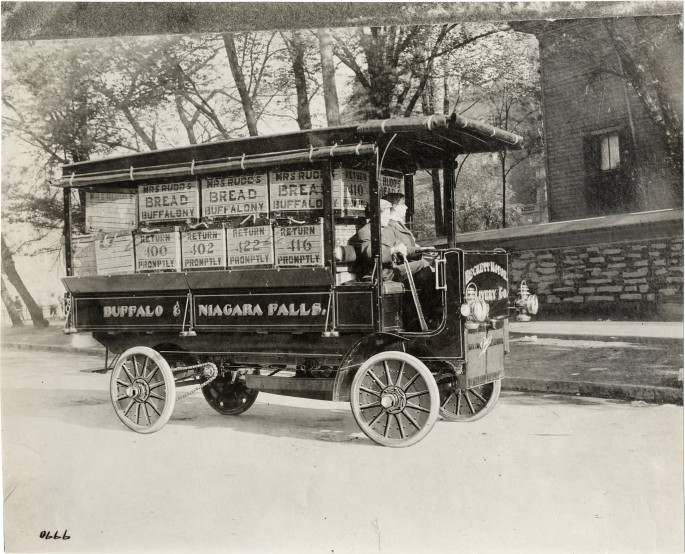 Here’s a load of “Mrs. Rudd’s” bread being delivered by a Rapid truck in the Buffalo, New York area. Imagine the terror of spending a Buffalo winter sitting on this thing?! Also note that the company wanted their shipping crates back after their contents had been emptied. 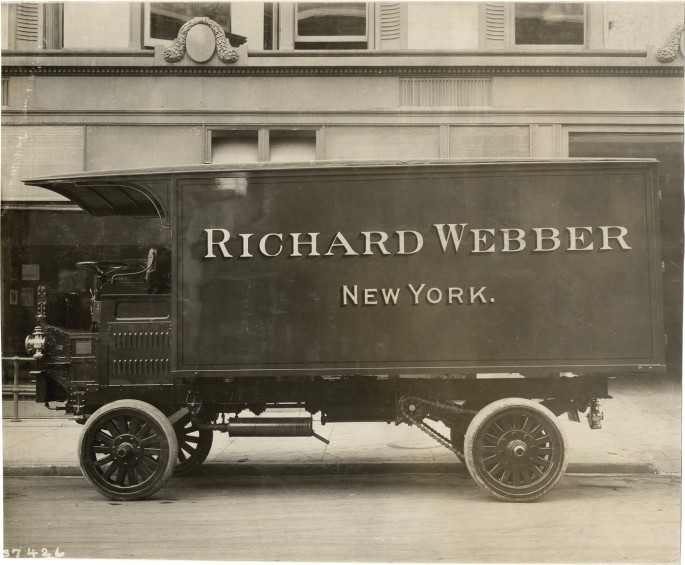 This enclosed 1910 Reliance truck has a really heavy duty look to it. It rides pretty high, the wheels are beefy, and the undoubtedly hand punched louvers on the side just below the driver’s area are really cool. Hey, at least these guys got a roof, right? 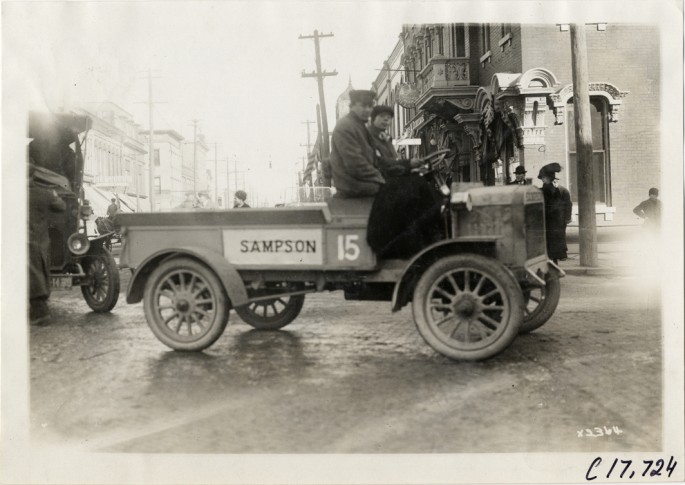 Here’s a 1910 Sampson participating in the Chicago Motor Truck Run of the same year. The guy riding shotgun looks like he is hoping the person shooting the photo will save him. 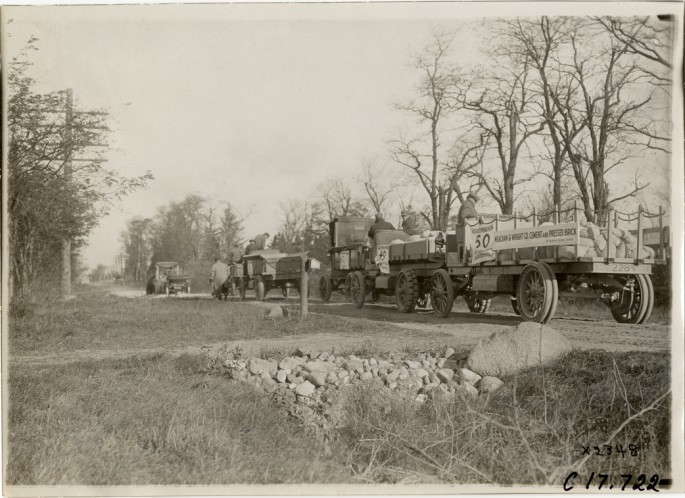 Here’s a shot of several participants lined up along the road as part of that Chicago Motor Truck run. The trucks drove from Chicago to Milwaukee and back. No results that we can find about how many started and how many finished. If you think drag week can beat someone up, think about this hell! 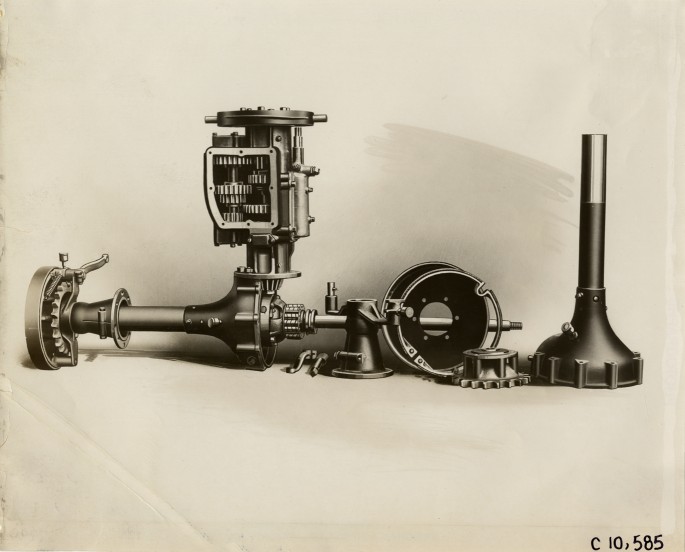 Here’s an awesome look at the axle and transmission assembly that would have moved a 1912 Federal truck down the road. Kind of interesting that it was a transaxle setup sans driveshaft, right? The big sprockets are obviously for the chain drive system. 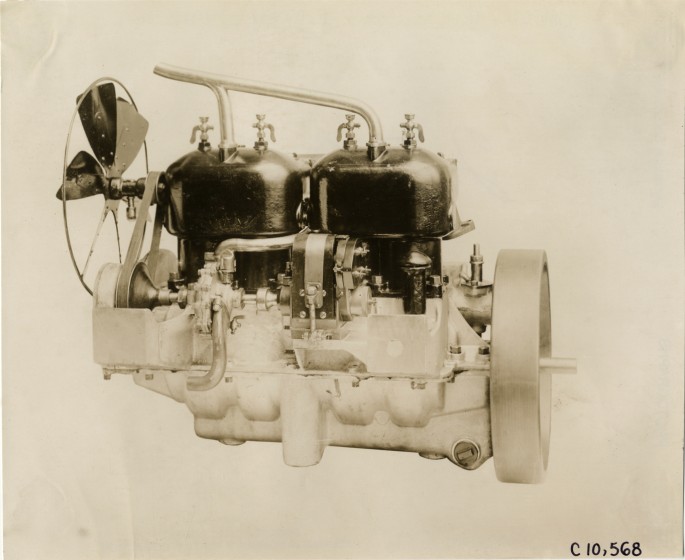 Here’s the (roughly) 255i four cylinder found in 1912 Federal trucks that made a whopping 30hp. How about those oiling cups on the top?! We’re guessing those are for valve train lubrication but that is a guess. 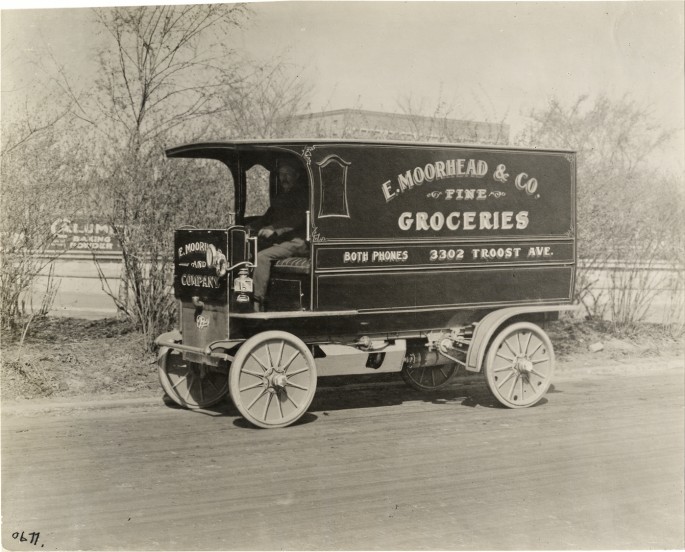 This grocery truck is a Rapid. We like the wheels which are an interesting solid design. It is mostly spokes we see at this time in history but these solids look pretty cool. We’re not sure if this was home or commercial delivery but either way, someone was hustling some food in this whip. 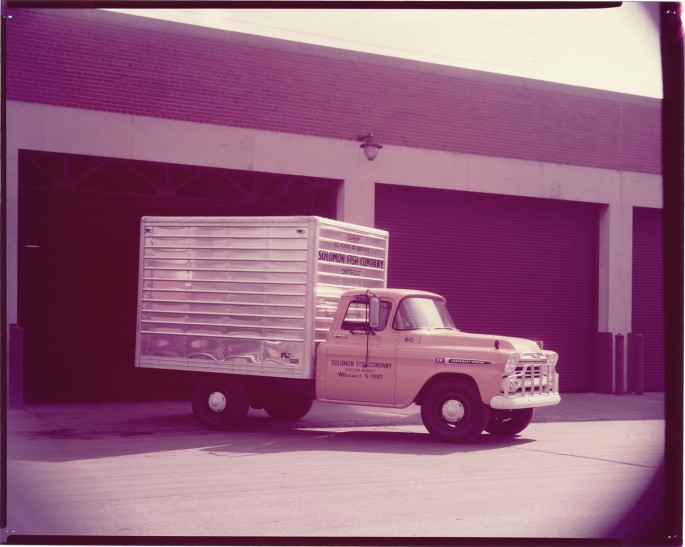 Hey, what’s this doing in here?! A little Easter egg for those of you who made it all the way to the end. This is a 1959 Apache truck and it looks good with the stainless steel freezer unit on the back. Now it is not a freezer unit like we know it. This thing would have been an insulated box packed with ice. Your fish was in the best shape if you were the first stop on this dude’s route.