Welcome back to our coverage of Project Power Laggin’! Follow along as we take a tired 1979 Dodge W150 Power Wagon we found in Central Maine and transform it from a derelict roadside attraction to a dependable, powerful weekend workhorse that lives up to it’s given name! In this installment, we go hunting for a new powerplant for the truck at a local junkyard!

If you’ve been following Project Power Laggin’ for a while, you know that the old LA 318 V8 under the hood has been the source of much of the “Laggin’” in the name. This engine is original to the truck, has never been fully rebuilt, and has put in 43 years of faithful service. That said, the last 3 years under our stewardship have shown that the ol’ 318 is ready for retirement. And recently, it tried to fast track the retirement party by skipping timing, bending five push rods, and allowing one of the valves to get introduced to a piston. While we got it running again, it has recently developed a knock in the bottom end, no doubt as a result of the aforementioned trauma. I mean, how many times can it tell us enough is enough and it wants out?

As good as this 318 looks, it sounds like the insides want to be on the outside. Somehow, it still runs well enough to run weekend errands and putt around town, but it’s only a matter of time before involuntary block ventilation occurs.

So, while it’s still running, we decided to put it to work once again. This time, the mission is to procure its own engine replacement and haul it home. So, we got some tools together, hopped in the truck, and pointed it toward our local junkyard to view a bumper crop of potential replacement mills. Our goals for a replacement engine:

-Something in decent condition that can drop in with minimal work
-More power and efficiency than the old 318
-Potential to use many of the upgraded parts we already have, like the MSD Atomic 2 EFI and Hooker Competition exhaust

This particular yard has all sorts of engines that will fit the truck, from replacement LA 318’s, to Chrysler Big Blocks, to even a Magnum V10 or two. Let’s go over these options:
Chrysler LA-Series Small Block One option would be to just get another LA-series small block. Since it’s identical to what we have, all of our parts bolt right on. While this is the easiest on paper, all of the examples at the yard were seized weather, like this rust nugget you see here. This would require machine work, leading to added expenses and lead time, and that’s even if things were good after getting it all apart. They also only had smog-era 318’s, so making more power would take additional work. Around here, there just aren’t many of these left in service or in the yards anymore. 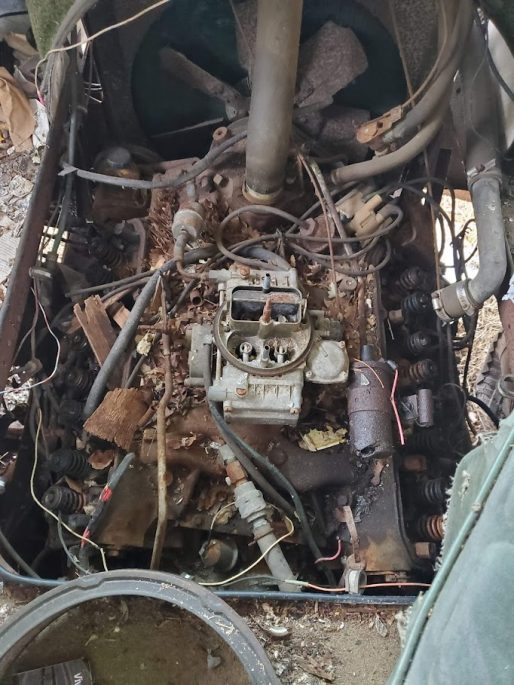 Big blocks are awesome, we can all agree on that. We still get giddy when we see one in a junkyard, and we immediately have visions of stuffing it in some small car for a mega HP build. But is it the answer we are looking for? To put it between the fenders of Project Power Laggin’, we would need a lot of new components, including a transmission and other bits. Plus, feeding a big block in times where gas is not cheap doesn’t sound good for the bank account. The truck gets 9MPG at best with the lowly 318. I shudder to think what a big block would do to that number. I think this one has a better use case in a Dart or other small Mopar product for weekend track blasts. The 318 and 360ci Magnum V8s are a very popular swap for LA-powered vehicles for many reasons. They offer some significant upgrades like roller cams and updated heads, and thanks to updated manufacturing, they leak a lot less than the older engines do thanks to new gasket tech. Also, they are dirt cheap and plentiful, as they were installed in most trucks and vans that Chrysler built for over a decade. The 360 ​​makes roughly double the power our old LA 318 makes just by adding a set of headers, and the ones currently in Project Power Laggin’ even bolt up! That sounds great, but there are some drawbacks. First, the intake manifolds have an updated bolt pattern, so either you have to drill the heads for the old LA pattern or purchase a new intake manifold if you plan on running a carb or something like our MSD Atomic 2 EFI. Second, these were meant to run EFI, so there’s no provision for a mechanical fuel pump in the timing cover. You’ll need to either run an electric pump or swap to the LA-series timing cover and accessories and add either a cam snout adapter for the fuel pump eccentric or a new cam made for carbed applications with the snout extension in the casting. Since we were already planning on keeping our EFI, this isn’t an issue for us. The earliest versions of the modern 5.7 Hemi are starting to end up in junkyards now, and they are also tempting swap fodder. While they do bolt to the 727 in Power Laggin’, figuring out all of the EFI wiring and getting the accessories working for one of these would be quite the undertaking. While they do make a bit more power than the Magnum series V8’s, was this worth the added trouble? We also found one of these rare beasts, a true mastodon of an 8 liter Magnum V10. These do share some internal parts with their V8 brethren, but there’s a lot of stuff that’s unique to the V10. They require a different transmission (shared with the Cummins Diesels), the factory EFI would have to be retained, and more. And if feeding a big block was bad, I don’t want to know what it’s like to have to feed a V10.

After weighing our options, we chose to narrow it down to the Magnum V8 in the 5.9/360 flavor. This is an option that gives us good power potential, better efficiency, and they are still available for very reasonable prices in just about every junkyard in the country. This yard had an abundance of Magnum 5.2’s and 5.9’s, so we opted for the higher displacement option, because as they say, there’s no replacement for displacement. With that said, we narrowed it down to four donor vehicles, all equipped with 5.9 Magnums: 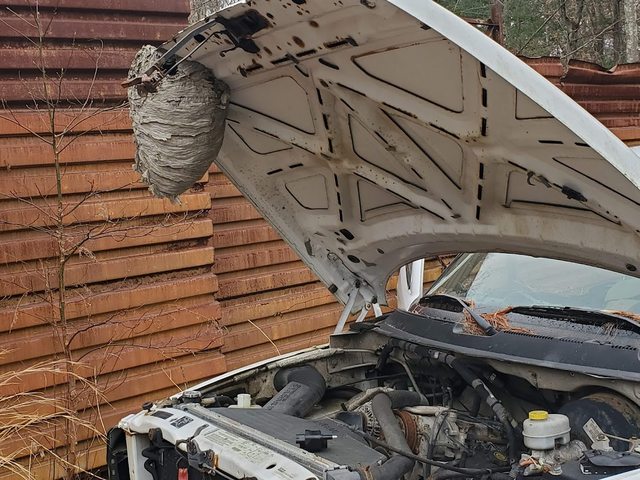 Buzz is a 2nd Gen Dodge Ram 1500 equipped with a 5.9 Magnum. I spotted Buzz last summer with the biggest wasp nest I have ever seen dangling from the hood. Someone took the hood and crushed the nest, and it’s winter now, so it was finally safe to check it out. The transmission was already out, and the engine turned over, but since that throttle body has been off for a while, who knows what it looked like inside. Still, it was in the running. Dub City is a 14-passenger 2000 B3500 with large-by-huge chrome wheels. It had a valid inspection sticker, so it must have been running recently. Pro Tip: If you’re looking for clues as to why a vehicle that appears to be in functional condition is sitting in a junkyard, check the interior. This one was littered with parking tickets and unpaid bills, giving us a clue that it may have been impounded. Why would someone let this massive party wagon get hauled off for scrap? 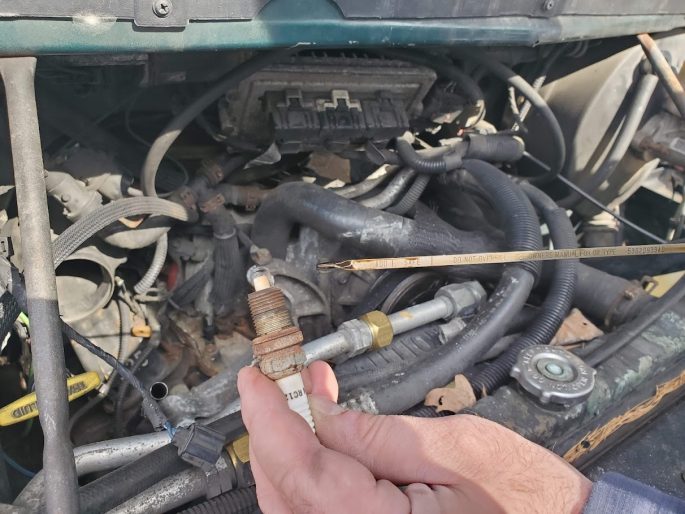 Plugs were clean, but the oil did not look great. And there wasn’t much of it, either. There was evidence of major sludging in the engine, because a lot of this stayed on the dipstick after it was wiped clean. Maybe it was abandoned due to a mechanical issue? Turning it over, it felt crunchy. That’s less than good. Gertrude is a 2003 Dodge handicapped transporter van that’s been here for a while. We had earmarked this as a potential swap candidate over a year ago when we started thinking about it. It was used by a local town as a transport van for a Council on Aging program, but its days schlepping the elderly to the bingo parlor are long over. Transmission was previously removed, too. This one had ALL of the oil. And then some. 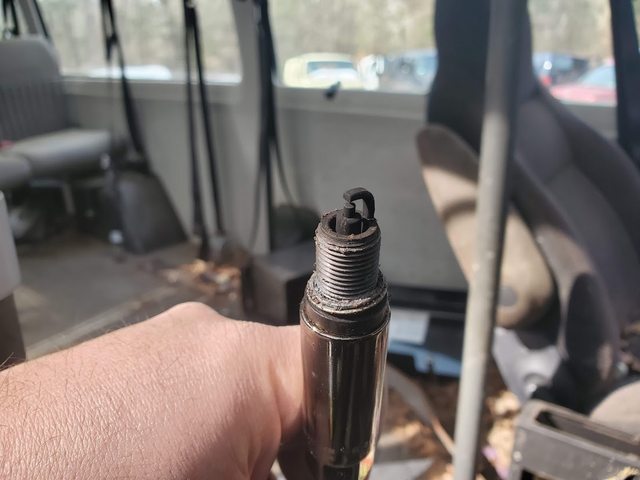 Plugs were… not great. Also, the engine was frozen solid and wouldn’t budge an inch. This was a non-starter. 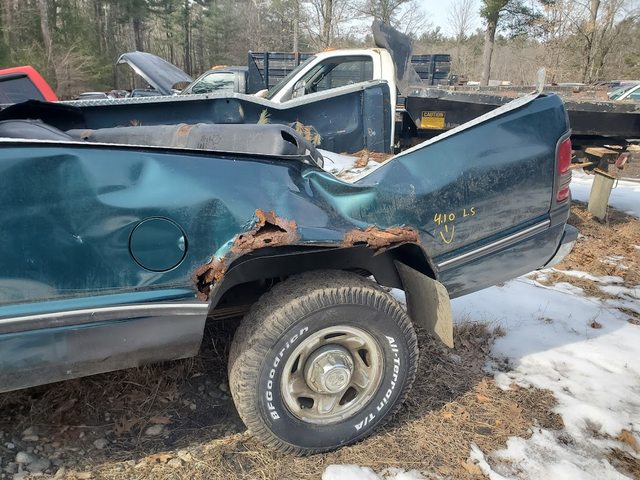 …Until a pine tree hit it . There was evidence of said tree in the bed. Plugs were worn but showed no signs of bad stuff. Manifolds still had some paint on them, a rare sight up here! Although, we noticed right away that one stud was missing and presumably snapped off in the head. Which one did we select?

This engine was the most complete, had the lowest miles, and aside from a broken exhaust stud, it seemed like the best of the bunch. After talking with the guys at the yard, they said it was a recent arrival that showed up a few days before our visit. And better yet, it was a runner. They drove it to where it sat. So, we struck a deal, they “harvested” the engine for us, and we loaded it up in Power Laggin’s bed and took it home. 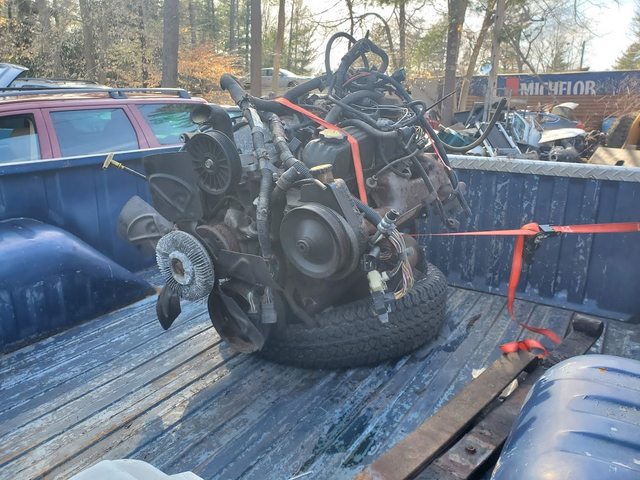 With the old 318 knocking away, we strapped the new-to-us 5.9 Magnum down and hauled it home.

We won’t be going too exotic with this swap, but we’ll show you what it takes to make one of these fit in an old Tin Grille Dodge. There are a few decisions that need to be made and modifications to perform that we’ll walk through as we bolt this into the truck. Stick with us as we make it happen!